Album Review: Back In Blue - A Blues Tribute to AC/DC 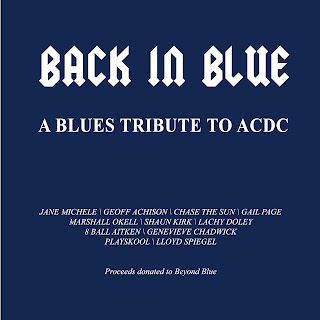 A blues tribute to a classic Australian Rock album... an interesting idea? I certainly thought so.
With a list of players of this caliber this album was guaranteed to be good, but this is beyond just good it’s great. Of course, when listening to these reinterpretations of AC/DC’s classic Back In Black album you will almost certainly be comparing them to the original recordings released all those years ago and which have now surpassed the 20 Million mark in sales which begs the obvious question of "do these reinvented recordings live up to the originals?" Truth be told, I couldn’t tell you as I don’t think I have ever listened to Back In Black in full! (yes you read that right) What I do know, is that there are some absolute gems on this release.
Here’s is my track by track musings of the release, read on if you choose or base your to buy to not to buy verdict on my above paragraph.
Kicking off proceeding is local blues guitar hero Geoff Achison with Jane Michelle on Vocals playing a bluesy ballady version of the rocker Hells Bells. The song starts off with snippets of news stories regarding the death of Bon Scott which automatically gives you a feel for just how big a story this was back in the day. Geoff’s slide playing is of course great and Jane’s Voice is a hell of a powerful weapon but somehow this version seems to fall ever so slightly flat somehow.
Things pick up from here with the Blues swagger of Shoot to Thrill, then it’s onto track 3 What You Do For Money Honey featuring the Vocal styling of Janis Joplin clone Gail Page with Jan Rynsaardt of The Arc Riders on Guitar. One of the highlights of the album the overdriven slide guitar together with Gail’s scratchy Vocals prove yet again that while "super producers" slave over layer upon layer of overdubs and trying to make everything sound as polished as possible sometimes all you need is one Guitar and a Singer and a stomping Blues tune to make people sit up and take notice.
Given The Dog a Bone gets a ZZ Top - La Grange style treatment with a somewhat strange Rap breakdown, Let Me Put My Love In You as performed by Shaun Kirk becomes a broody pine with a somewhat Love Ain’t No Stranger by Whitesnake feel to it.
Lachy Doley is up next once again using his croaky drawl to full effect on Back In Black on a stomping pedal to the metal version which is less blues and more rock minus the guitars but with some great Deep Purple-esque sounding fuzzed up Hammond Organ grooves and even an Organ solo. (Check out his live shows if you haven’t already people you won’t be disappointed).
If you have ever heard Sarah McLeod of The Superjesus perform her acoustic ballady version of You Shook Me All Night Long you might know roughly what to expect of 8 Ball Aitken’s interpretation of the song also. But while there are certain similarities between the 2 interpretations 8 Ball most definitely cranks the Blues factor up to 11 with another yearning type vocal delivery (with added ooh’s and ahh’s for effect) and some great reverb laden slide guitar playing. Lachy Doley once again makes an appearance on keys while Vika Bull’s backing vocals lift the tune into the stratosphere.
With only 3 songs to go you find yourself thinking this is too cool I can’t wait to hear what’s next.
Have A Drink On Me is performed brilliantly by Genevieve Chadwick on acoustic guitar, no real re-interpretation here but there’s no need when the riffs work just as well on Acoustic as they do on a Cherry Red Gibson SG.
The rhythm section is where it’s at with Shake A Leg. The only thing to say about this tune is hot damn has it got a groove to it! Complete with Harmonica & Sax solos and outros which I’m still trying to figure out if I like or not (not that they’re badly performed or don’t fit the song per se it’s just that I think I might have preferred to hear that groove run straight through uninterrupted).
Last but most certainly not least (and according to some, leaving the best until last) comes Australian blues royalty with Lloyd Spiegel… It’s Lloyd Spiegel doing AC/DC, that’s all that need be said about this one!
Once again this is a great idea executed very well. Add to this that all profits from this release will be donated to the Beyond Blue charity who do some great work for helping people suffering from depression as well as providing a better understanding of what depression is for people who perhaps have a “just snap out of it” mentality towards depression and you can’t go wrong.
Find it on Itunes or JB Hi-Fi online
Posted by Musicman at 10:55