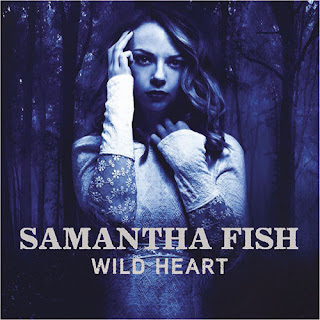 Samantha Fish has released a new album called Wild Heart and it is everything I was hoping it would be. I 1st heard of Samantha Fish on the awesome Blues Rock album Girls With Guitars which has a great uptempo feel good vibe to it. The album was on repeat for weeks after I got my hands on it.
Released through Ruf Records who have been doing some great work with their releases in recent years.
I see this album as a return to form for Samantha as I was not overly sold on her sophomore album Black Wind Howlin'.
This album features everything we have come to expect from Samantha, the blistering fretwork, great footstomping anthemic blues rock tunes and that unmistakable southern drawl. Her slide work once again features prominently throughout the album as it has on previous releases. And while you can expect to find all the usual things that Samantha has delivered on previous releases there are some slight signs of perhaps a maturing artist with the acoustic ballads on the album.
The songs Go Home, Lost Myself and I'm In Love With You are strategically placed to break up the pace of the album and show Samantha exploring themes such as domestic abuse, alcoholism, homelessness and of course failed relationships. Yet again I imagine my neighbours will be well and truly sick of hearing this album being played at maximum volume over the coming weeks. Look like the future of the blues is in good hands.
The only thing left now is for her to announce an Australian Tour.
Posted by Musicman at 21:58 No comments: