So I just discovered this awesome singer that's new on the scene and I just had to tell the world how awesome she is. Her name is Dana Fuchs... what's that...? she's not new...? OK, well she's kinda new... What's that you say...? She released her 1st album in 2003? Well why didn't somebody tell me about her before dammit?! 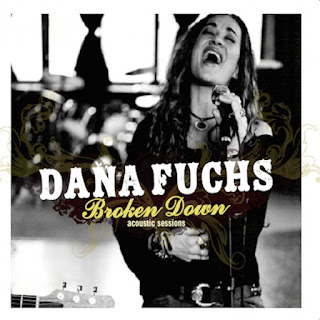 OK I admit it, I dropped the ball on this one. Dana has been around for a while now and her name will probably be familiar to many but once again for me it was a case of, "I'll get around to it when I have the time" and then never did. Just recently her name popped up again with the release of her latest album Broken Down Acoustic Sessions so I figured I'd finally see what she was all about. As the title of the album suggests these songs are acoustic interpretations of songs which appear on some of her previous releases plus some extra's.
Dana has a voice that is instantly recognisable, a gravelly rasp that will almost immediately draw comparisons to Janis Joplin. In fact, Dana has actually played Janis in a stage production Love, Janis and you can see why she would have been chosen do to so, given that at times you can almost be mistaken that you are listening to Janis herself. While the comparisons are justified, make no mistake, Dana is not to be simply dismissed as just another Janis clone. She owns these songs and sings with feel and emotion that draws you in and makes you listen intently to what she is delivering. Mixing blues, soul and pop with a slight hint of country this album is perfect lazy, rainy day listening. Primarily made up of ballads and mid-tempo tunes this is not an album that you will be turning up to 11 so as to piss off the neighbours, but damned if it isn't a toe tapper, a tear jerker and well, just an awesome album all round.
Having released her last 4 albums on the German label Ruf who also have/had Samantha Fish, Joanne Shaw Taylor, Royal Southern Brotherhood, Devon Allman and many other modern blues artists on their roster, this should give you an idea what to expect. In short this yet another quality blues release from a brilliant artist that should be getting a hell of a lot more attention than what she is.
If you have not heard Dana Fuchs before, this is a damn good place to start.
Posted by Musicman at 23:55 No comments:

Ever come across a release that just completely changes your life and lifts the musical bar to a whole other level? Well if this is what you want to hear, then I would recommend looking elsewhere because you won't find it here. What? Huh? What's the point of this review? I hear you asking! Bear with me on this one and you'll see where I'm going.
Is this an earth shattering, ground breaking release that will forever change the face of music and which will be remembered for years to come? Well OK no it probably won't be BUT if you are looking for an album of rocking tunes that you can sing along to and which will transport you back to when you were a teenager singing into a hair brush or playing air guitar with a tennis racquet in front of your bedroom mirror (which is exactly what this album aims to do) then this release is for you. 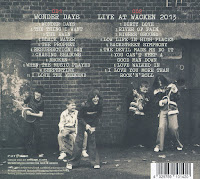 The opening lines of the title track with which the album begins are "First day of school they called me a disgrace, They didn't like the long hair" which should give you an idea of what to expect
Thunder have been releasing albums since the early 90's however this is the 1st of their albums I have heard. The riffs are big, the choruses are just as big and the guitar solos are showy without being over the top (no unnecessary Yngwie Malmsteen style wankery to be heard.)
There's the obligatory ballads to break up the pace of the album the 1st one "The Rain" coming just 3 songs into the album is a great little acoustic ditty with added piano and mandolin giving it a distinctly Led Zeppelin feel before picking up again with Black Water a song about a "respectable wife" who's looking for some excitement in her life and decides to run away with a "streetwise seventeen" year old (now that's deep!).
If you are familiar with Thunder you will probably know exactly what you can expect from this release and if you are not familiar with Thunder, well... you will probably still know exactly what to expect from this release. This is rock music for the here and now with no thought of how long it will last which is perfectly fine.
Thunder have achieved exactly what they set out to do with this release which is to deliver footstomping, fist pumping, arena rock. If this is your thing then this is a highly recommended release. You can check their discography to date here in the meantime I'm off to track down some of these said releases.
P.S. if you listen to this and you like what you hear I also highly recommend tracking down the albums by The Union which is guitarist Luke Morley's other band and how I came to discover these guys.
Posted by Musicman at 12:00 No comments: