Album Review: The Speakeasies Swing Band - Starved To Death In A Land Of Plenty 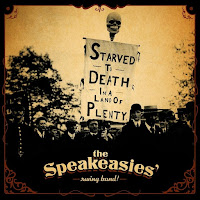 For those you are not already aware there seems to be a Swing Jazz revival going on at the moment (especially in Europe) and I'm absolutely loving it!
One band who I discovered a couple of years ago and who are getting noticed for all the right reasons are The Speakeasies Swing Band from Greece. I have been waiting for a full length release since hearing their debut EP Bathtub Gin and it is everything I hoped it would be.
Starved To Death In a Land Of Plenty is the bands debut full length album, and while the title may be a dig at the financial/political crisis going on at the moment in Greece this album is all about feel good music and danceable tunes. An absolute stellar effort by a band who have captured the sound of a bygone era perfectly. If you have ever watched a movie starring Fred Astaire and wanted to get up and start dancing yourself then this album is for you.
Recorded live in one day you can hear just how much fun the band is having playing these tunes. The Album features 10 songs in total 2 of which are sung in Greek and one in French (which is actually a cover of The Godfather Love Theme "Parla Piu Piano") and while it certainly helps to understand the lyrics of these particular tunes that's not to say the songs cannot be enjoyed even if you don't.
Having played all over Greece and Europe these guys (and gal) are a class act and are set for world domination.
Hopefully this release is the first of many more to come. On a side note... err no pun intended... If you like the sound of these guys you may also be interested in checking out The Swing Shoes, Crime Swing Investigation, Gadjo Dilo and others.
In the meantime here's my favourite tune from Starved To Death In a Land Of Plenty:

Posted by Musicman at 23:02 No comments: