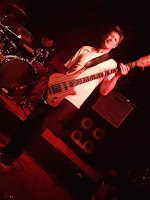 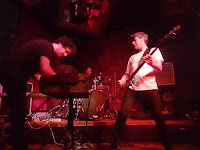 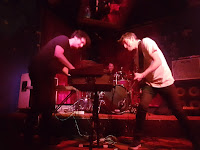 I’ve seen many a live show since my last live review many moons ago and while there have been some great shows none have inspired me to put pen to paper (metaphorically speaking) so I can tell the everyone willing to listen about what I witnessed.
There were 4 acts in total on the bill this night but I was there to see one & one only and that was OOLLUU. I had seen these guys once before opening for another great act Glasfrosch and was thoroughly impressed but that was a mighty long tome ago. Were they really as good as I remember…? Would they live up to my expectations…? Well to say that my memory served me correct and that they lived up to my expectations would be an understatement. They were ginormagantuanly, fantasmagorically amaze balls!
OOLLUU play a style of music that I really don’t know how to describe. It’s electronic, but it’s heavy. It’s rock music, but there’s no guitar. It’s intense, but it’s poppy and danceable. There’s many contradictory elements in their music and things that probably shouldn’t fit together that somehow seem to blend wonderfully well and create a soundscape that will leave you on a euphoric high once it’s over.
Playing to a crowd of roughly 50 people on a “stage” that barely fit the band on it the performance these guys put on was a thing to behold. Stage right was Bassist Davarj who in his mind I’m sure was playing to a sold out crowd at Wembley Stadium or Madison Square Garden. Stage left you have Ehsan on Synths (“fluent in 3 languages… Linux, IOS and Windows”) who while is somewhat restricted in movement was no less a giving it his all. The interaction between these 2 “frontmen” of the band was fantastic and a joy to watch. The smiles on their faces as they were playing evidence of just how much they were enjoying themselves. Lastly, hidden from view slightly was Drummer Ben Crook who was driving the band like his life depended on it.
Sure there were a couple of little mistakes, but the crowd most certainly didn’t mind (or probably even notice) and I’m sure these guys gained a few more fans on the night.


There were 2 more bands on after OOLLUU and while I’m sure they put on admirable performances I didn’t stick around.

Posted by Musicman at 14:30 No comments: