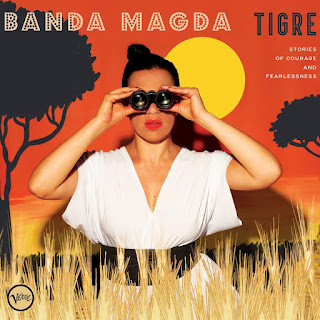 Banda Magda are a band whose sound is very hard to pigeonhole. The band is made up of musicians from the world over and their music ranges from sounding a little bit Jazz, a little bit Psych, a little bit Chanson Pop, a little bit Latin and many other things besides. However, perhaps the best word to describe their music is simply this: Brilliant!
They have just released their 3rd album called Tigre which has been 3 years in the making. Tigre is an eclectic release full of worldly sounds and rhythms which is pure ear candy and an absolute delight to listen to.
The lyrics are mostly in French & Greek (none are in English but don’t let that deter you) the songs are catchy, the orchestration throughout the album is sublime and the production is fantastic also. At times the sound is like something from a 60’s romance movie soundtrack, while at other times you'll want to get up and dance to the Tango & Bossa-Nova rhythms while the final song on the album Diamandi (meaning Diamond in Greek) even has a slight Massive Attack type of feel to it. This band seems to be going from strength to strength with each release. If you want to hear something slightly different to what you hear on mainstream radio and perhaps challenge your ears somewhat, then this album comes highly recommended. Without a doubt one of the best releases of 2017 so far.

Posted by Musicman at 22:44 No comments: