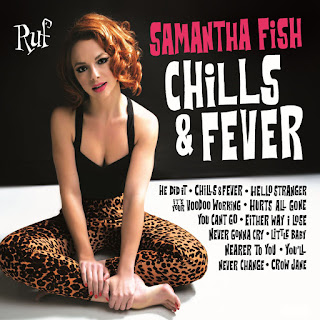 Ruf records are one of my favourite labels at the moment releasing quality blues of all flavours from soulful blues to blues rock to acoustic blues and are one of the champions of women in the blues.
Samantha Fish is one of the many female blues artists that got her break on Ruf and she has just released her 5th Album on the label which sees her breaking from her well established Blues Rock sound. This album has one foot firmly planted in the 60’s Soul/Motown era while the other is at different times planted in Rock, Garage and Country. Chills and Fever sees the addition of a horn section and the usual blistering Guitar work which Samantha is usually known for is replaced by playing of a much more subdued nature which is more suited to the Soul sounds being delivered on this album. The sound channels the retro/modern feel previously championed by the likes of Duffy, Amy Winehouse and to a lesser extent Vintage Trouble and while it can be a fine balancing act trying to tap into the retro feel without sounding kitsch Samantha Fish most definitely manages to pull it off in fine style. The lyrical content of the 14 songs over 54 minutes doesn't stray from the well worn path of relationships which can be wear slightly thin over this length but despite this minor bump in the road start to finish this album is simply a delight to listen to.
And while some small amount of people may initially scratch their heads at this new direction it is unlikely Samantha will be losing any fans and if anything will see her gaining more than a few new ones.
Posted by Musicman at 22:54 No comments: 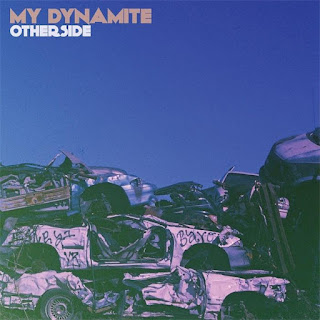 Australia’s very own version The Black Crowes are back and they mean business. With 9 tracks of country blues rock Otherside is an album that has been in the pipeline for a while now and boy oh boy am I glad it has finally been released. If you own any album by The Black Crowes then this album has to be added to your collection.
My Dynamite wear their Black Crowes influences clearly on their sleeves for all to see and make to apologies about it. While it may be easy to dismiss this band as simply being clones, I dare anyone to put this album on and not sing along to the infectious choruses of songs like the lead single Witch Hat, State We’re In etc. Even though the Black Crowes influences are clearly there for all to see, this is an album that will also sit comfortably next to releases by The Allman Brothers, Lynyrd Skynyrd and their ilk. If you already own music by the aforementioned bands then grab yourself a copy of this album and if you don’t and don’t intend on adding anything by these bands to your collection in the foreseeable future then quite obviously this album is not for you.
My Dynamite have found their winning formula and are sticking to it. You will find all the usual ingredients that a band playing this style of music throws into the mix. Slide Guitar, Lap Steel, Harmonica, warbling Organ lines filling in the gaps in the background and Gospel style backing Vocals provided by the awesomely talented Eliza and Talei Worgramm (check out the Wolfgram Sisters Album you won’t regret it!).
Otherside is 45 minutes of pure unadulterated safe southern blues rock bliss that colours well within the lines and there nothing wrong with that. My Dynamite know their audience and deliver for them exactly what they want to hear. Now if only mainstream radio would pick up on this album and start playing it you’d no doubt see this band scoring opening slots for stadium acts and headlining much bigger shows on their own.

Posted by Musicman at 00:21 No comments: