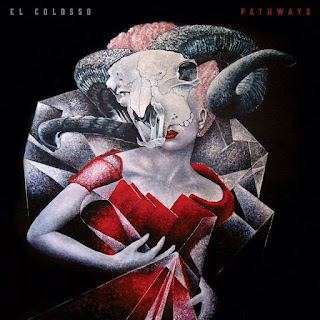 I’ve re-connected with the Heavy Rock scene in recent times after being absent for a little bit and am loving what I’m hearing. The latest band to catch my attention are El Colosso. Having caught them playing around Melbourne town a few times recently I was eager to get my hands on a copy of the bands debut full length release Pathways and they have not disappointed. The riffs are heavy with crunchy distortion, the guitar solos are jaw droppingly flashy while still keeping to the adage of “The Song Is King” and the Bass is front and centre in the mix and once again as heavy as fuck. As soon as you press the play button on your CD player or drop the needle on your Vinyl copy you will be blown across the room and through the wall behind you.
While each and every song on this album is killer, at times I think some of the lighter songs on the album such as Pathways and King Ink don’t quite fit in with the rest of the tunes. The songs most certainly don’t suck, in fact if you heard them come on the radio they would most certainly make your ears stand to attention, but the flow of the album perhaps would have been better served by keeping the balls to the wall sound throughout.
The highlights of this release I would most definitely have to say is the relentless pace of the song Leatherhead and the nearly 10 minute epic closer Moving Mountains with it’s slow groove, added Hammond organ and the brilliant dual lead guitar work of Benny James and guest Dave Ferguson of Fuck the Fitzroy Doom Scene.
This album has all the ingredients you can expect from the Stoner Rock genre and while most of the influences the band lists I am not familiar with, I suspect that they listened to the album Carnival Of Souls by Kiss at least a couple of times during the recording of this album. While Pathways doesn't necessarily contain any surprises that’s not to say that this is a bad thing. This band has delivered an awesome heavy rock album of a caliber many others could only hope to achieve. Don’t miss seeing them play live and while you're in the process of grabbing a copy of their album grab yourself a copy of the Cannonball EP also.

Posted by Musicman at 20:28 No comments: