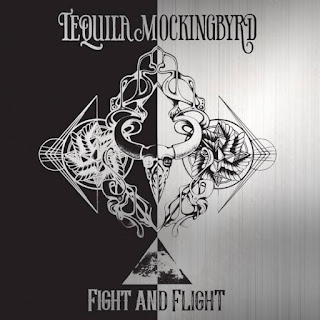 Phwoah, does this album pack a punch or what??!! Having seen this band play a few times in the past I had purchased their debut EP the 1st time I saw them play, so I was very much looking forward to this release.
From the opening riff of the anthemic "I smell rock n roll” to the closing notes of “Good Time” this is feel good boozy rock music as it’s supposed to be played. Rose Tattoo meets The Screaming Jets meets The Baby Animals meets The Superjesus this band has all the right ingredients needed to bring back heavy distorted guitar riffage to the mainstream charts again (and I hope they do!). Full of piss and vinegar this is perfect getting ready for a big Saturday night music designed to be played at maximum volume.

The songs on the aptly titled Fight And Flight are primarily a celebration of the good things in life such as enjoying the weekend with friends but also send out the empowering message of grabbing life by the throat, which we all know but at times forget. The most telling sign of the quality of these tunes is that you will almost certainly be singing each and every chorus of each and every song after only one listen. Slick without being overproduced this is a brilliant debut guaranteed to get this band noticed and will almost certainly put them on the world stage.

If you’re of an age with the ladies delivering these tunes this album will most certainly strike a chord and if you happen to be past the age of regular Saturday night booze ups this will transport you back to that age.

“Clear the street because we’re coming through, side by side and two by two"

Posted by Musicman at 00:12 No comments:

Well as always it's been a great month of gig going in Melbourne town and there's been some doozys! (yes I did just use the word doozys) where to start, where to end, who to include and who to leave out? I am without a doubt going to forget something/someone but here's a short list of the stuff I can remember off the top of my head. 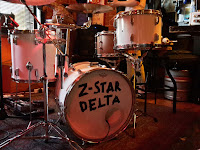 Hailing from the UK this duo know how to paint a picture with and take to you on a journey with their storytelling style lyrics. Using loops and effects to build layers of interweaving sounds which help you visualize the images the songs convey this was their 2nd tour of OZ in as many years and I was stoked to finally catch them as I had only seen the flyers for their last tour after the fact. Think of what The Doors might sound like if Jim had a drum kit in front of him while Robby played his bottleneck style blues licks and you might get an idea of what they sound like. Hopefully they will be back sooner rather than later and they will get noticed by much larger audience. Miss them at your peril!

I've lost count of how many times I've seen Lachy doing his thing at Bar 303 in Northcote. There was a bit of a question mark hanging over this show as although Lachy has been doing shows at 303 for around five years or so the last few 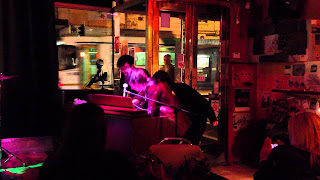 shows have been slightly down in attendance so he was pre-selling tickets this time around and had to sell at least 50 of them for the show to go ahead. Thankfully he did and the show did go ahead. He's played with the likes of Jimmy Barnes, Mahalia Barnes, Powderfinger, The Dead Daisies and even former Deep Purple bassist Glenn Hughes has specifically asked for his services. Playing the only whammy clavinet known to exist in Australia his croaky vocal drawl was used to full effect as always. As many times as I have seen him play he always gives his all and always wins over new fans at the night and this time around was no different. People were lining up at the end of the gig to buy his CD's and to say how much they enjoyed his show. Why he is not playing sold out shows to rooms of a much larger capacity stills boggles the mind. 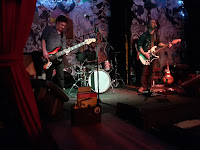 Wahooooooo what a ride that was! You know a band is good when they are jamming on stage and it all sounds pre-planned. Although all 3 members of the band are smoking hot musicians the highlight for me was Grant Cummerford playing is Bass as if he was the lead guitarist. While it's not unheard of for the bass to be used as a lead instrument I've never seen it played in quite this way before. This may have been my 1st time seeing these guys play but it most certainly won't be the last. 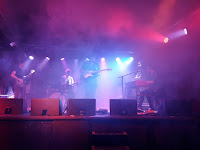 Not the 1st time I've seen Kumar play but the 1st time I've caught him playing his own tunes. I'm guessing that Kumar has not heard the saying "the notes you don't play are just as important as the ones you do" because I think he played every note known to man in every combination possible during the 60 or so minutes he was on stage. Now this may sound horrible to some people but as a kid who grew up worshiping the playing of people like Joe Satriani, Steve Vai, Eddie Van Halen and their like this was like being transported back 20 years and watching the fingers of these guitar heroes in wide eyed wonder. All this being said make no mistake, even though the guitar wankery factor was turned up to 11 Kumar still knows how to play with feel and know which notes to play and which notes not to. This was by no means a free for all and composition was/is still king in his musical ethos. Special mention also to the 2nd guitarist in the band Mickey Chan who also got to show off his shredding skills.

Well there's just 4 of the many shows I did attend and while I have been on a bit of a blues rock kick as of late I still subscribe to the theory of there are only 2 types of music, good and bad, regardless of what genre label you choose to attach to them. With the Melbourne International Jazz Festival and the Stonnington Jazz Festival just around the corner I imagine the shows I will be talking about in the coming months will be of a different style.
Posted by Musicman at 23:13 No comments: