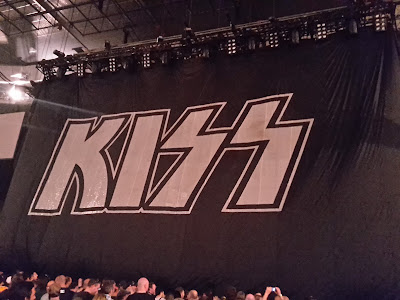 It had been a mighty long time since I had gone to see a major rock show and when I heard that KISS were coming to town again I was more than a little bit tempted especially seeing as I have been a fan of the band since I was a kid. Some of my earliest memories are of watching the 1980 Melbourne show at VFL park on the TV and collecting KISS cards and buying KISS ice cream from my local milk bar/corner store. That being said, I have seen that band numerous times in the past and having heard countless people mention how Paul Stanley's voice has deteriorated I was also somewhat hesitant as I didn't want to be disappointed by seeing a band past their prime struggling to keep it together. In the end 2 days before the show I bought my tickets and headed to Rod Laver Arena the night of the show prepared for the worst but still hoping for the best. 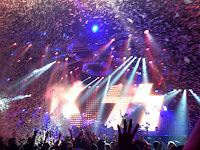 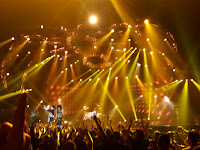 Well, to say I was not let down would be the understatement of the year. While the accounts of Paul Stanley's voice having deteriorated are accurate the band still delivered the goods in spades. Tearing though a setlist of classic tunes which kicked off with the brilliant opener Detroit Rock City, the band pulled out all the stops for this show and from beginning to end it was a non-stop over the top rock show which allowed you to forget about your job/mortgage/whatever for a couple of hours and enjoy the spectacle.
At one point in the show Paul Stanley asked the crowd "How many of you have never seen us before?" after which he commented that the show will be "a night you will never forget" which is quite a statement of confidence but if there's anyone that can live up to such a statement and deliver on said promise it's KISS!
KISS seem to be a band that people love to hate and which fans of the band will go to any length to defend. No matter which category you fall into one thing that can't be denied is the fact that 40+ years on the band still delivers a show that very few other bands/artists can match. See them while you still can as I'm uncertain how long anyone of their vintage can continue doing what they do.

Mention should also be made of the opening act The Dead Daisies who are a great band in their own right and whose two records to date are probably some of the best rock releases in the past 2 or 3 years. Made up of an all star line up featuring players from bands such as Guns N Roses, Motley Crue, Whitesnake, Billy Idol, Baby Animals and others these guys know how to deliver great rocking tunes. Despite the slightly apathetic crowd (which caused singer John Corabi to quip "There was more noise at my Grandmothers funeral") they managed to deliver 45 minutes of great rocking tunes which I'm certain would have won them a number of new fans on the night. From the opening notes of Midnight Moses to the final notes of the closing number (a rocking rendition of) Helter Skelter they know how to put on a great show. These guys may just be the saviours of Rock and given the connection they have to Australia I'm sure we'll be seeing them visit our shores again in the not too distant future which is certainly not a bad thing at all.

Posted by Musicman at 16:23 No comments: