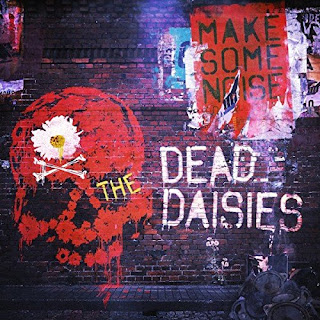 Relative newcomers on the heavy melodic rock scene The Dead Daisies are just one of the many bands flying the flag for this style of music and they do it very well. Anthemic, fist pumping, head banging arena rock tunes this is a band that knows their audience and delivers exactly what their fans want. Now this might sound to some people like something to be avoided at all costs but in the immortal words of the Rolling Stones "It's only Rock N Roll but I like it".
I have been following John Corabi's career since his days in the band Union which was formed in partnership with ex-Kiss guitarist Bruce Kulick and for my money he is one of the best singers and songwriters in the Hard Rock scene.
Together with songwriting partner David Lowy and the rest of his band mates in The Dead Daisies he has delivered one of the best (if not THE best) rock records of 2016. This album is pedal to the metal driving rock music with choruses that you can't help but sing along to.
The stunt guitar work provided by monster guitarist Doug Aldrich will have you reaching for your air guitar and dusting off your long neglected heavy rock records of yester-year to give them another spin and dream of playing to stadiums full of people singing every word of the songs your playing.
Add to this the rhythm section of Marco Mendoza and Brian Tichy who drive these tunes like an unstoppable freight train or rollercoaster which makes you feel like holding onto your seat for dear life and you have an album that is guaranteed to appeal to rock music fans the world over.
Feel good, middle finger in the air, FTW tunes with a couple of "topical" tunes thrown into the mix (ie. Long Way To Go and Song & A Prayer - which is probably the highlight of the disc for me), sure you could probably nit pick and say it's been done before or the lyrics could have used slightly more polishing but really what will that achieve?
Put this album on turn it up to 11 & rock the hell out!
Posted by Musicman at 10:00 No comments: