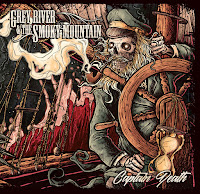 Well, well, well what do we have here? A bluesgrass/folk band out of Greece? OK I'll bite, let me hit the play button and see what they have to offer.
Now let me say that when I hear a bands sound described as Bluesgrass or Country I will usually run away screaming but this band was recommended by a friend whose taste in music I trust.
Captain Death is the first full length release by Grey River & The Smoky Mountain and it's a doozy! The album starts off with the sea shanty/Rum Swilling stylings of the title track Captain Death which will instantly have you swaying to it's rhythm just as if you were walking the deck of a pirate ship on the high seas. The song perfectly sets the tone for the rest of the album which is made up of 10 infectious bluegrass/americana tunes with choruses that you will be singing long after the 10 songs have finished and which may even inspire you to take up line dancing (you have been warned!).
While the album certainly doesn't have any low points the highlights for this listener are most definitely the songs which lean more towards the Sea Shanty style as opposed to the more straight forward country/bluesgrass style.
The Vocals of Rena Papageorgiou are nothing short of sweet nectar, while the contrasting voice of Sarantos Goumakos will at times bring to mind Nick Cave (especially on The King And The Crow which has a distinct Where the Wild Roses Grow feel to it).
Tasos Gousetis and Thanasis Giouleas round out the band line up on Fiddle & Double Bass to bring a sound that you you would swear has been created somewhere in America's deep south it sounds so authentic.
If you are a fan of the Bluesgrass/Americana genre you could most certainly do a lot worse than checking out this band and if (like me) you are not necessarily a fan of the genre... well... check out this band anyway, you may just be pleasantly surprised.
P.S. Credit also has to be given to the guest musicians on this recording who add some colour not heard on the debut EP and also the fantastic artwork of Jon Toussas which makes this record stand out on a record store shelf.

Posted by Musicman at 22:43 No comments: